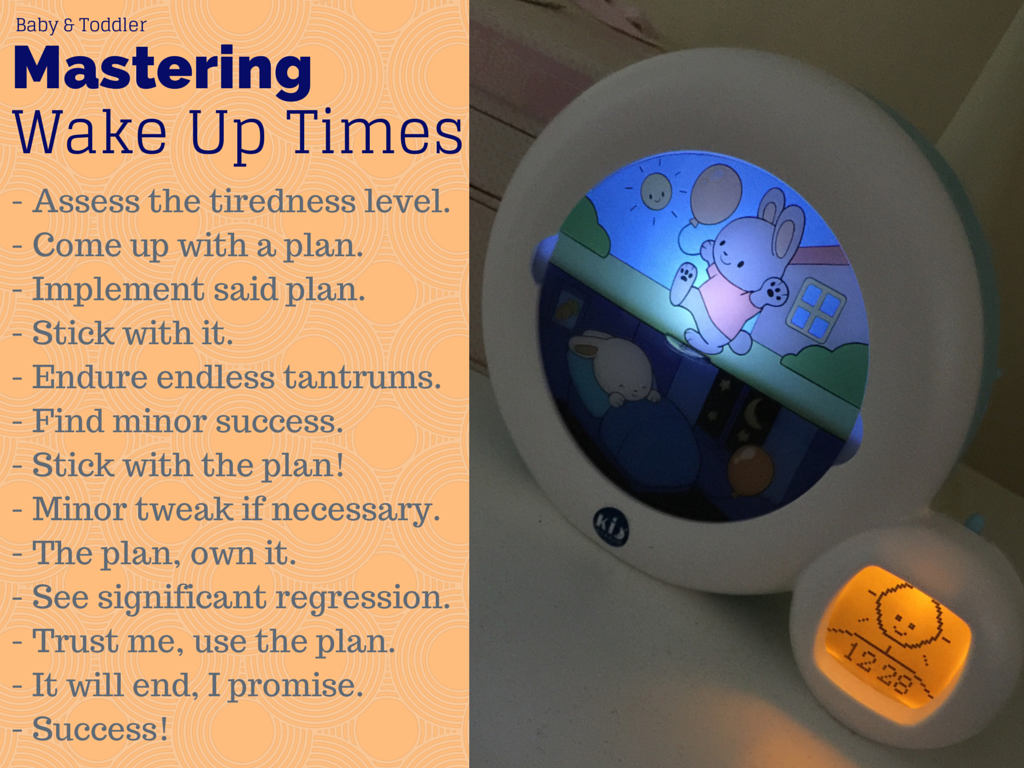 We’ve been having an ongoing battle with morning wake up times in our house, going on a year now since our youngest was born. Far from the easy sleep her sister was, the little one took us on a merry dance of multiple wake ups per night. Her sister, was sleeping through by three months. Not so for this little charmer! Fast forward to about 9 months and the little one was still waking occasionally due to teething, colds etc.

Throughout this time of early rising and too few hours of parent sleep, the three-year-old would spring out of bed at the slightest noise (usually thanks to the rugrat) and put up a huge fight if told it was too early. The crazy part was, she seemed wide awake and happy to go about her day. A few days into this and the fatigue would begin to show in crankiness and general irritability. Not to mention, my own morning routine was thrown for a chaotic loop when I never knew when or even if I could find a minute to shower or attempt to exercise. My husband is usually out the door pretty darn early so corralling the minions was up to me.

We started with a two-pronged defense. We allowed the three-year old to stay up a slight bit later at night in hopes that a consistent delay in bedtime would help alter her time clock slightly. We also purchased a toddler “alarm clock” that has a picture on the front. One portion of the picture shows an awake scene and one shows a bedtime scene. If she stays in bed until the bunny is “awake” she’s allowed a reward of some sort in the morning. We had recently gotten her a LeapPad for her birthday so 10 minutes of “computer” time was a powerful motivator. That said, it took a few weeks of consistency (and lots of crying and pleading on her part) before the behavior began to sink in.

We were careful not to punish her when she didn’t succeed. We’d just patiently explain why she wasn’t getting the reward (multiple times if necessary). Many times, she’ll still wake up before she’s allowed out of bed, but we’ve successfully kept her from getting up before her allotted time. Now, she’ll pick up a book or play with her animals in bed until she can get up. That’s fine by me since I know where she is and am not worried about her waking her sister. She had been getting up between 5:30 and 5:45 so I started with 6 am and have gradually added 10 minutes to that every so often. Now she is allowed up at 6:30 and boy does that make a HUGE difference in my sanity.

As for the babe, the methodology for dealing with her frequent wake ups was more along the “grin and bear it” variety. When she wakes it’s always something significant, be it soaking wet diaper, an objection to the temperature, gas, teething, what have you. She is very difficult to get back to sleep without a bottle, but if it’s still the middle of the night I make her one and quickly settle her. I’ve tried rocking and soothing for over an hour and trust me when I say, it does nothing. She’ll lie there and coo at me for hours if I let her. In the morning, I’ve made a conscious effort not to allow her early wake ups to alter my routine. Unless she’s crying with real distress, I let her whinge in her crib. If it’s before 6 or 6: 30, most often she’ll fall back to sleep. At almost a year old, she rarely wakes during the night now and again, only for significant reasons. I’ll cope with that.

Now, if only I could train Daddy to hear those nighttime wakings and get the bottle before I have to elbow him in the ribs…

Our methodology:
1.  Figure out the root of the problem (in our case, crazy early wake-up time).
2.  Brainstorm a few ways to solve the problem (toddler clock, later bed-time, reward system).
3.  Come up with some new rules to tackle the problem (explained thoroughly and repeatedly to toddler).
4.  Sleep on it a few days, make sure you’re happy with the plan (heck, ask the toddler for input if you like).
5.  Enforce the plan (again, with copious amounts of explanation to the toddler.)
6.  Remember, the behaviors will escalate before they change.
7.  Re-assess and make minor tweaks if necessary (large changes and you’ll be starting over completely!)
8.  Consistency will win out in the end (though your sanity will be sorely tried).
9.  Enjoy your hard-won success. Everyone will be happier for it.