The seven week shift – regaining sanity after a newborn 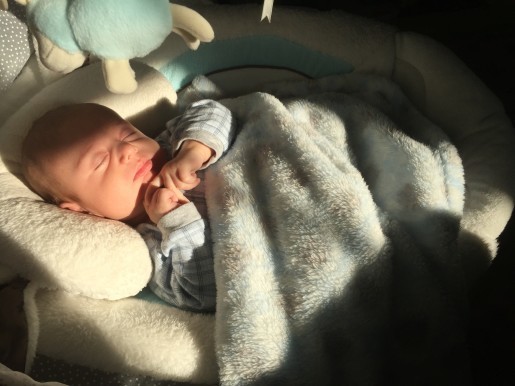 The joy and awe of having a newborn is immense, and overwhelming. This is especially the case when you have two other kids running around with the same needs they’ve had for the past 2 and 4 years. As with any new addition to a family, sleep is highly coveted commodity and chaos is only a hairsbreadth away.

After the first week or two of adjustment, the older kids quickly realize they can exploit this new bundle of joy. They will get up to all sorts of antics knowing mom is trapped in a chair feeding their newest sibling and so, can escape any and all repercussions. Enter the month of yelling. Deprived of any other recourse, Mom quickly devolves into a hoarse mess as she attempts to keep all the tiny humans alive and relatively well taken care of. Socks may not match and baths a thing of the past, but they’re fed and rested aren’t they?! Meanwhile, the tiny humans are rejoicing in their freedom and flaunting their newfound power as they blithely go about any activity they find amusing. Needless to say, nothing that Mom wants accomplished is on their to-do list.

As the days chug along with excruciating slowness, the new babe gradually begins to fall into the rhythm of the household. During waking hours, Mom can at least count on an hour or so of slumber from the little one, provided the babe is constantly snugged up against a boob or tucked under an arm. Allotted this modicum of freedom, she can now rampage around the house and one-handed, attempt to rectify the fracturing discipline she has managed to hold onto. Understanding that yelling is never the answer (though that was never in doubt), she gamely attempts to re-establish the love and trust that once reigned supreme. Enter the age of the tantrums.

While a semblance of order has begun to creep back into existence, the toddler and pre-school variety of tiny humans have entered a new phase of rebellion. Gone are the days of outright, smiling smugness and enter the age of tears, buckets and buckets or tears. The toddler now employs epic tantrums at the slightest of provocation, or just because. The preschooler responds to the re-establishment of tyranny by dissolving into tears and whining before she even hears more than one word uttered from a parent’s mouth.

Not all hope is lost. As the weeks go by, the babe reaches the magical age of 7 weeks and a monumental shift is about to transpire. The babe will sit or lay, awake or asleep…alone! Gone are the days of Mom’s one-armed failings. Slowly, but surely the minuscule footholds that were being put into place will begin to hold and order will gradually return. Mom will begin to remember she isn’t caring for three well-mannered demons, but instead the three darling children she loves so very much. No doubt the future holds many more challenges, but she can rest assured that there is a light…somewhere down the deep, dark tunnel.