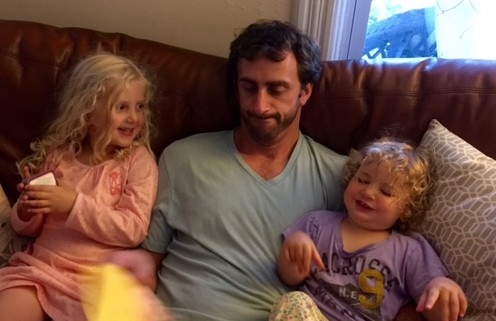 Finally able to read books together without the little one running off!

We have made a transition and our two girls, now aged 4 and 19 months are sharing a bedroom. Other than the occasional early wake-up call, it’s gone pretty seamlessly. Our youngest (for the next 6 weeks at least) is still in a crib and the elder is in a twin bed. They both like their rest so once they’re asleep, we’ve been in the clear.

The only major transition was the nighttime ritual. Previously, we had been taking them up around the same time and using the divide and conquer method. My husband would read to one while I got the other settled and topped off with a small bottle. Going to bed at the same time was out of the question as our two little chatterboxes would keep each other up if we let them.

To help with the transition, I started taking up our younger daughter at the normal bedtime and getting her settled. She drifts off into dreamland fairly quickly, so with a delay of 15 minutes or so, our older daughter quickly follows. However, she’s been known to enjoy a good book or ten. At bedtime, we’ve already read to her and then allowed her to take one book to bed to “read” as she falls asleep. At times, this has led to “reading aloud” and singing in bed for a time before she finally goes to sleep. To combat waking the babe, we’ve taken to putting our eldest to sleep in our bed and then moving her when we go up to bed. All in all, this has solved any nighttime woes (and dealt with any bed wetting problems as we make her take a trip to the potty as we move her to her bed).

This was the case last night as I went up and moved her to her room. Yet, when my husband came up a short while later, he found a small form curled up next to me in our bed. Being only six weeks from D-day with our third child, I had clearly fallen asleep and was none the wiser! Considering the stumbling and grumbling that I had to endure on the potty run, I’m amazed that she managed to wake up again. I don’t think she opened her eyes once!

On the flip side, our youngest was up pretty early this morning and started talking and singing almost immediately. When we went in to release her from crib prison…our eldest was curled up in her blankets and still fast sleep! Apparently, the noise wasn’t going to keep her from getting her rest.

Our advice for transitioning kids into sharing a room:
1. Talk it up! Get them excited about the idea.
2. Be prepared for some early mornings…it’s inevitable, but they do get better at sleeping later.
3. Make noise! Even before you make the transition, don’t keep a silent house. We live in an old house so they were well used to hearing each other long before they started sharing a space.
4. Be consistent. Like any change, they may rebel at first. But keep on keeping on and things will usually iron themselves out…eventually.
5. Don’t be afraid to make small changes to their routine. Small changes over time quickly become just part of their normal routine. Especially with older kids, just explain the changes and usually they can adapt fairly well once they know what to expect.