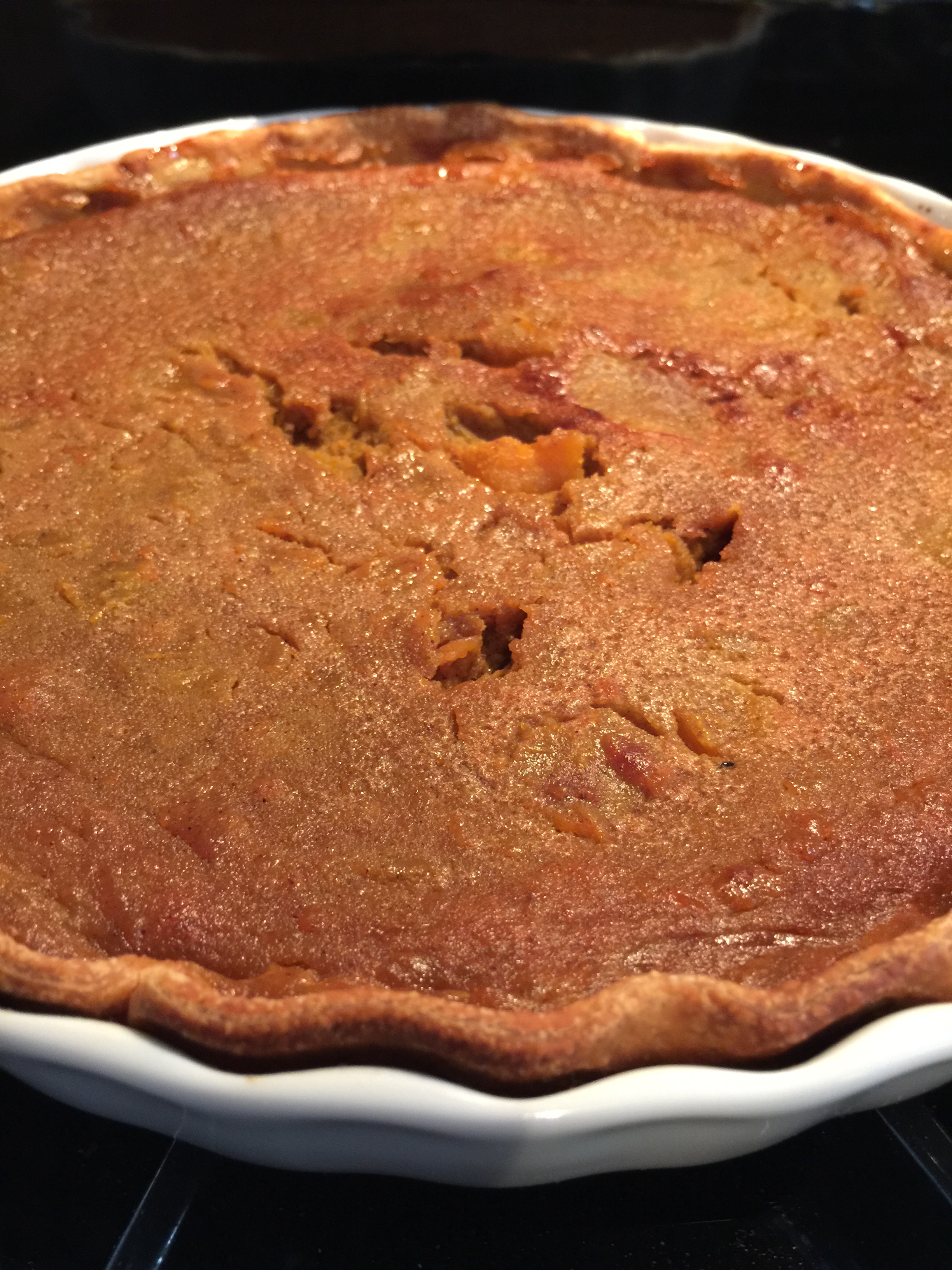 My husband LOVES pumpkin pie. I’m not a huge fan, there’s just something about the texture. However, when our neighbor kindly gave us a Boston Marrow Squash and we realized it’s famous for use in Pumpkin Pie, I just had to take a stab at it (literally) and find a great pumpkin pie recipe.

The first challenge was actually splitting the darn thing so I could roast it. I broke a knife point clean off. Next time, I’m getting a wedge and a mallet…no joke. Another method is to roast the squash before trying to cut it open. This would probably be a bit easier, but way less adventurous.

I placed the halves face down on a large cookie sheet lined with foil. Then I baked at 400 degrees for 60-90 minutes. Mine actually took about 55 minutes before the juices were gushing and bubbling in the pan. You can also try to cut the halves into smaller pieces but that just seems like you’re asking for trouble (see above). The good news is once you’ve got it open…you get millions of seeds! Once the squash was roasted to the point where a knife (not the broken one!) slid right through the flesh, you’re all set. I let it cool for a while as I wrangled kids into chairs for lunch, naps etc. Removing the flesh of the squash from the skin was pretty easy, most of it came away with a spoon and could easily be mashed into a puree. I ran a few bits through a food processor but really, they could probably have used a bit longer in the oven. Note for next time. The good news is you’re going to have way more puree than you could possibly need for one pie. You can easily freeze some for the next time around! Next up was the filling! I used three eggs (straight from our hens) and hand whisk them until yolks and whites were combined. Then I slowly added 1/2 cup white sugar, 1/2 cup packed brown sugar, 1/2 teaspoon of salt, 1 teaspoon of allspice and 1 teaspoon of cinnamon (I like my spices!). Add in 2 cups of Boston Marrow puree and combine. Finally, add 1/2 cup evaporated milk (If you don’t have any hand, which I never do, you can simmer a little over twice the volume you want to end up with until it reduces. In this case, I used a little over 1 cup of whole milk.)

Slowly add the warm milk to the filling mixture. Finally, pour the whole lot into a pie dish prepared with a pie crust. I used a fairly vertically sided pie dish so the filling would be uniform across the entire pie.

Pop this into the oven at 450 degrees for about 45-50 minutes. When an implement of your choice can be inserted at the center of the pie and come out clean, it’s ready! There should be little to no jiggle if you move the pie dish (similar to a quiche).

I have to say, for a person who doesn’t really enjoy pumpkin pie…this is pretty darn good! Official taste test by the hubbie to follow…